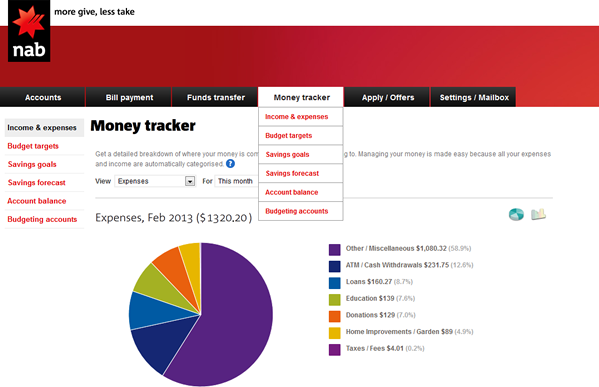 Earlier today, National Australia Bank (NAB) issued a media release promoting its new ‘pioneering’ online personal finance analyser Money Tracker. According to the bank, the software is a ‘free, self-service money management tool that takes all of the headache and guess work (sic) out of budgeting, tracking money and saving for goals.’

NAB obviously has high hopes for the app. It has its own tab right in the middle of the internet banking menu bar and a colourful widget in the sidebar. Clicking on the tab reveals six sub-menu items which allow customers to:

The software is very intuitive with well-designed tables and cute interactive graphics but is it a friend or foe?

Money Tracker is essentially a mechanism for pigeonholing and analysing the transactions on your bank statements.

When you select the Income & Expenses tab, for example, the application generates a pre-filled pie chart listing all your expenses for the month.

The fact that the bank can produce this kind of graph should probably come as no surprise but it’s still quite startling to see your weekend trip to Bunnings, loan payments and donations all pre-sorted into categories by the bank, presumably based on the merchant’s name or ID.

Where Money Tracker runs into trouble is with non-mainstream purchases and deposits which it dumps into a catch-all category called Miscellaneous/Other. To garner more information on these suspense items, there’s a red button at the bottom of the screen which invites the customer to slot them into one of the bank’s 41 expenditure categories.

It’s a similar story on the income side. Money Tracker assumes that large deposits into your bank account are salary but just to be sure offers you ten alternatives – like investment income or government allowances – so you can describe and classify them more precisely.

Even more helpfully, NAB says the program will ‘learn and remember any changes you make for similar transactions in the future.’

Customers who use Money Tracker will therefore be providing the bank with an almost live picture of their financial situation at any point in time. And if they choose to use the scenario analysis option, they will be giving some important insights on their future plans as well.

While Money Tracker has some useful features, NAB customers should think twice before giving out even more of their personal financial information.

There are some potential potholes for the bank as well.

Money Tracker might be pioneering but not necessarily in a good way.